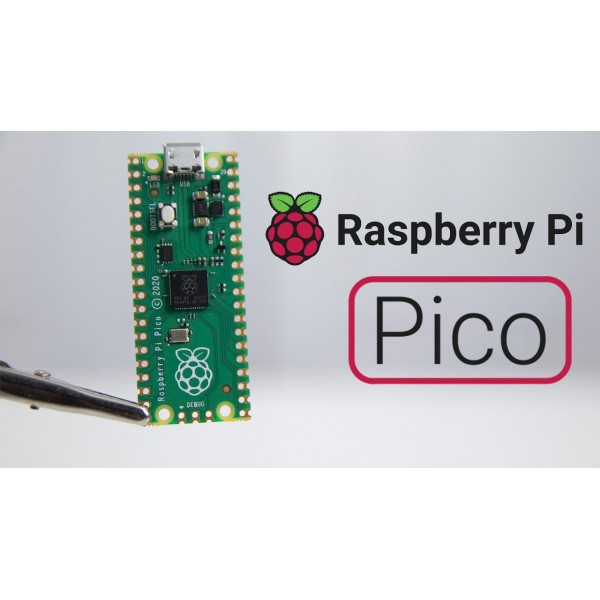 The Raspberry Pi Pico is an entirely new type of microcontroller from Raspberry Pi. Small, cheap and flexible - it’s great for learning to code with MicroPython!

Whether you’re looking to learn about the MicroPython programming language, take your first steps in physical computing or want to build a hardware project, the Raspberry Pi Pico – and its amazing community – will support you every step of the way.

The Pico isn’t designed to replace the Raspberry Pi SBC, but aimed to target Arduino users.

Whereas you might use your Raspberry Pi to play games, write stories and browse the web, your Raspberry Pi Pico is designed for physical computing projects where it can control familiar components such as LEDs, buttons, sensors, motors and even other microcontrollers.

The Pico can be quickly and easily programmed using MicroPython and C/C++ using popular editors such as Thonny. Getting started is also very easy thanks to the dedicated Getting Started page.

The main chip on board is the 'RP2040' made by Raspberry Pi (their first in-house microcontroller chip!) and is a dual-core ARM Cortex M0+ processor, with a flexible clock running up to 133MHz.

Arduino Uno R3 (Original - Made in Italy) This is the new Arduino Uno R3. In addition to all the features of the previous board, the Uno now uses an ATmega16U2 instead of the 8U2 found on the Uno (..

Raspberry Pi ZERO W   The Raspberry Pi Zero is half the size of a Model A+, with twice the utility. A tiny Raspberry Pi that’s affordable enough for any project! 1Ghz,..