ODROID-N2 is a new generation single board computer that is more powerful, more stable, and faster performing than N1.
The main CPU of the N2 is based on big.Little architecture which integrates a quad-core ARM Cortex-A73 CPU cluster and a dual core Cortex-A53 cluster with a new generation Mali-G52 GPU.
Thanks to the modern 12nm silicon technology, the A73 cores runs at 1.8Ghz without thermal throttling using the stock metal-housing heatsink allowing a robust and quiet computer.
The CPU multi-core performance is around 20% faster and the GPU is 10% faster than the N1. The N2’s DDR4 RAM is running at 1320Mhz with 1.2volt low power consumption.
The large metal housing heatsink is designed to optimize the CPU and RAM heat dissipation and minimize throttling. The CPU is placed on the bottom side of the PCB to establish great thermal characteristics.

More information is on our WiKi. 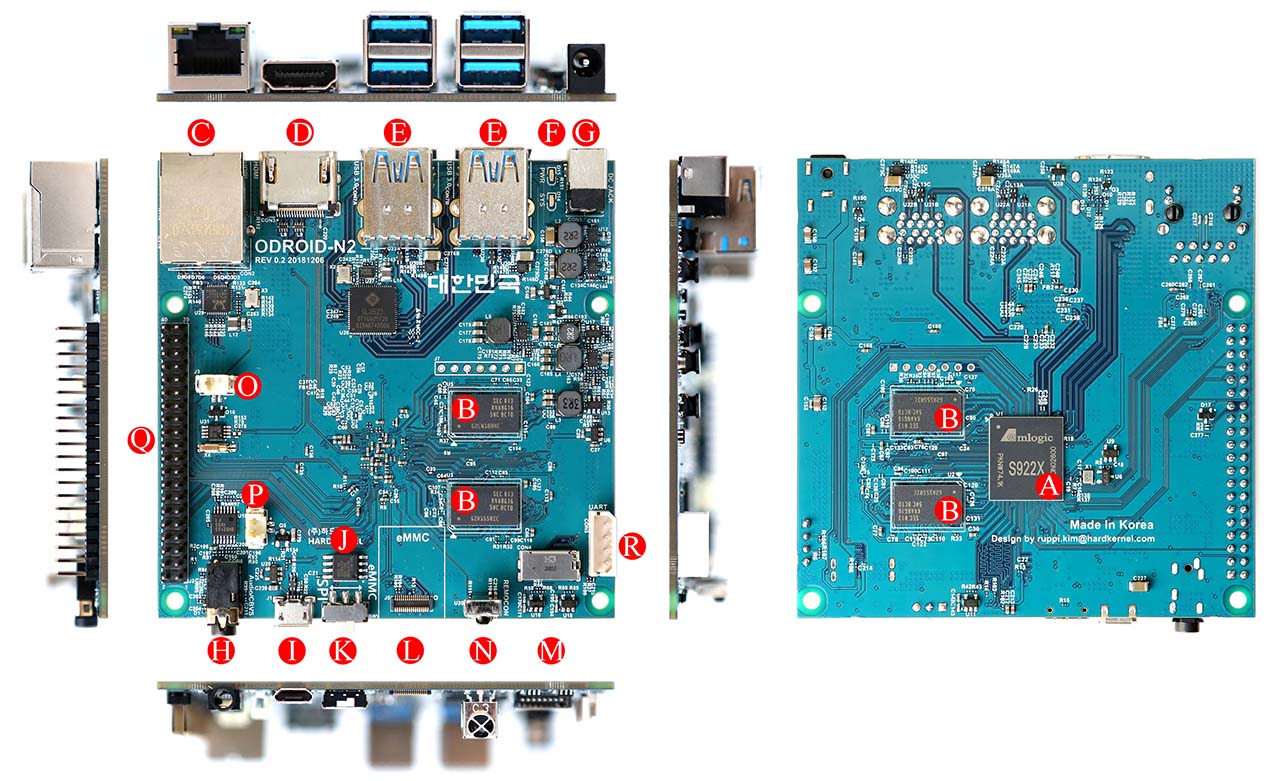 GPU shader performance
The Mali-G52 runs at 846Mhz and is ~10% faster than Mali-T860MP4 in ODROID-N1.
The Mali-G52 is the second Bifrost-based mainstream GPU from Arm.
There are two Shader Processors in the GPU and each core has three Execution Engines. This is sometimes referred to as MP6.
GPU performance was measured with glmark2-es2 “–off-screen” option.

Source : Tested by forum user hominoid
The GPU powered hash computing rate on N2 is over 30% faster than N1.
All three SBC ran Lyra2rev2 simultaneously on a shared network. Each platform’s sgminer was compiled with the latest ARM Compute Library v18.11.

Thermal characteristics
To check the thermal throttling, we ran some heavy CPU and GPU loads together on the SoC and monitored temperature. We ran the test within a chamber that keeps the ambient temperature at 35°C. So we believe the large stock passive heatsink is enough for very heavy computing loads.
cmd : stress-ng –cpu 6 –cpu-method matrixprod && glmark2-es2-fbdev –off-screen –run-forever 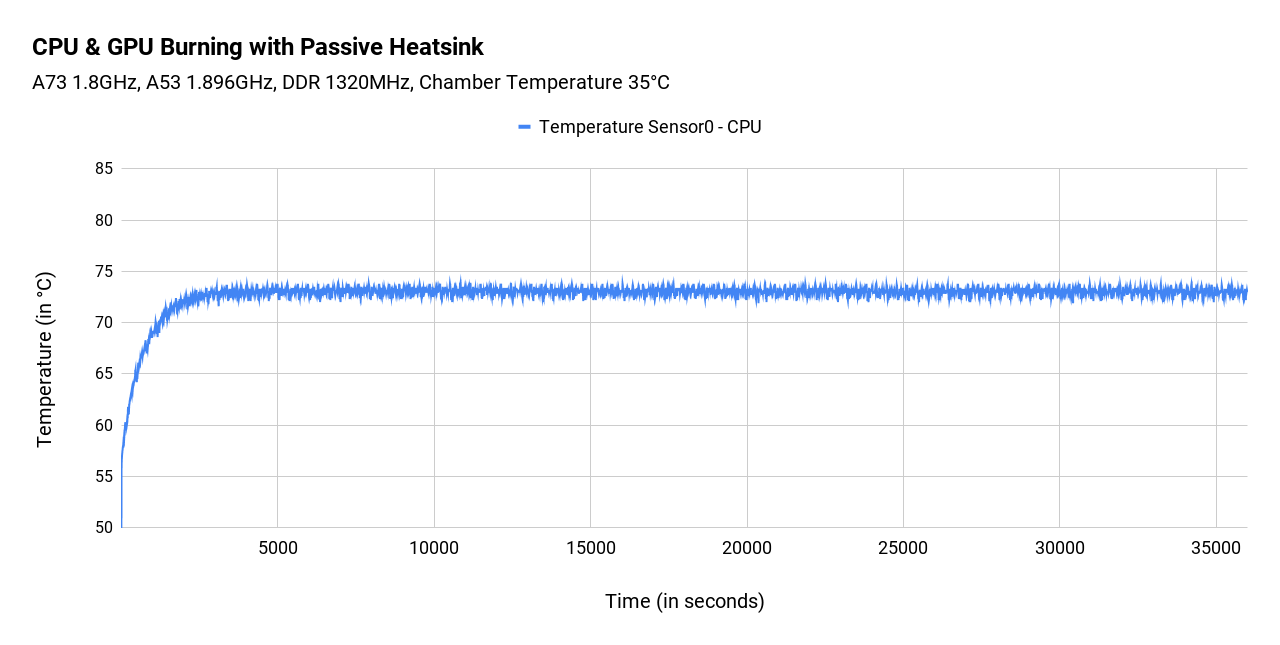 Gbit Ethernet
According to our iperf test result, the throughput performance was near 1Gbps.

USB 3.0 hosts
We measured the USB transfer speed with a UAS capable SSD.
The average ~340MB/s of throughput should be acceptable for many application.
Since four USB host ports share a single root hub, the transfer rate must be lower if you use multiple USB devices at the same time.

The previous S905 SoC couldn’t activate the UHS mode once the system boots from eMMC. But S922X can keep using the UHS mode with the eMMC module simultaneously.

Sound DAC
ODROID-N2 has an on-board high quality 384Khz/32bit stereo audio line output.
Dynamic range and SNR is near 100dB and Total-Harmonic-Distortion is lower than 0.006%. You can enjoy Hi-Fi sound quality without an external expensive audio DAC.

SPI Flash memory boot
ODROID-N2 can boot from on-board SPI memory instead of uSD memory or eMMC cards.
The on-board SPI memory is 8MB in size and can include the bootstrap binaries, U-boot, bare minimum Linux kernel, and a ramdisk that includes “Petitboot”. The “Petitboot” software provides a user friendly interface and allows users to select a boot media.
Unfortunately, since the SPI bus on S922X shares the hardware interface with eMMC, the SPI flash memory on ODROID-N2 is only accessible at boot until the eMMC hardware block is activated. So you have to remove eMMC module and boot from a SD card to update firmware in the SPI flash easily.

RTC
ODROID-N2 has an on-board RTC component, NXP PCF8563, interfaced to the I2C bus and can use a backup battery as an alternative power source while the main power source is absent. Since the actually measured power consumption is less than 1uA, the RTC can run for over 10 years with a CR2032 backup battery. Also, this will let your ODROID-N2 wake up at a certain time once you set an alarm time and shutdown it.

The N2 GPIO interface is similar to C2 and fully supports a 3.3Volt interface while N1 could only support 2.8Volt IO. This is beneficial for using various peripherals without complicated level shifters.
Another big improvement is a faster SPI bus interface. Its maximum frequency is over 150Mhz, and we will try to implement a DMA driven SPI driver for faster LCD display.

Linux
Two Ubuntu 18.04 LTS images are available with Kernel version 4.9.162 LTS as of today. This kernel version will be officially supported until Jan, 2023.
A hardware accelerated video decoder (VPU) driver is ready. We have c2player and kplayer examples which can play 4K/UHD H.265 60fps videos smoothly on the framebuffer of ODROID-N2 HDMI output.
The Mali G52 GPU Linux driver works only on the framebuffer. We tested the latest PPSSPP emulation and it can handle x3 scaling on a 4K display nicely with well implemented VSYNC.
The fb-dev Mali driver supports OpenGL-ES 1.1, 2.0, 3.0, 3.1 and 3.2 as well as OpenCL-1.2 and 2.0 at this moment. Note that you have to use the Minimal Ubuntu OS image to utilize the GPU acceleration instead of the Ubuntu Mate image.

There will be a Linux Wayland driver a few months later. We are intensively working on it together with Arm and Amlogic.
Unfortunately, there is no X11 GPU driver since Arm has no plan to support X11 for Bifrost GPUs anymore. Therefore you have to consider ODROID-XU4 if you really need the OpenGL-ES acceleration on X11.
You can monitor the development status of Wayland with the mainline Kernel in this thread.

Android
Android 9 Pie is ready, and we will release a full source code BSP and pre-built image together. Note that GUI layer(SurfaceFlinger) resolution is limited at 2K while the video layer is true 4K.
At this moment, Android user land supports only a 32bit system while the Kernel runs in 64bit mode.
We will eventually try to support a 64bit Android system with Vulkan capable GPU driver in a few months. 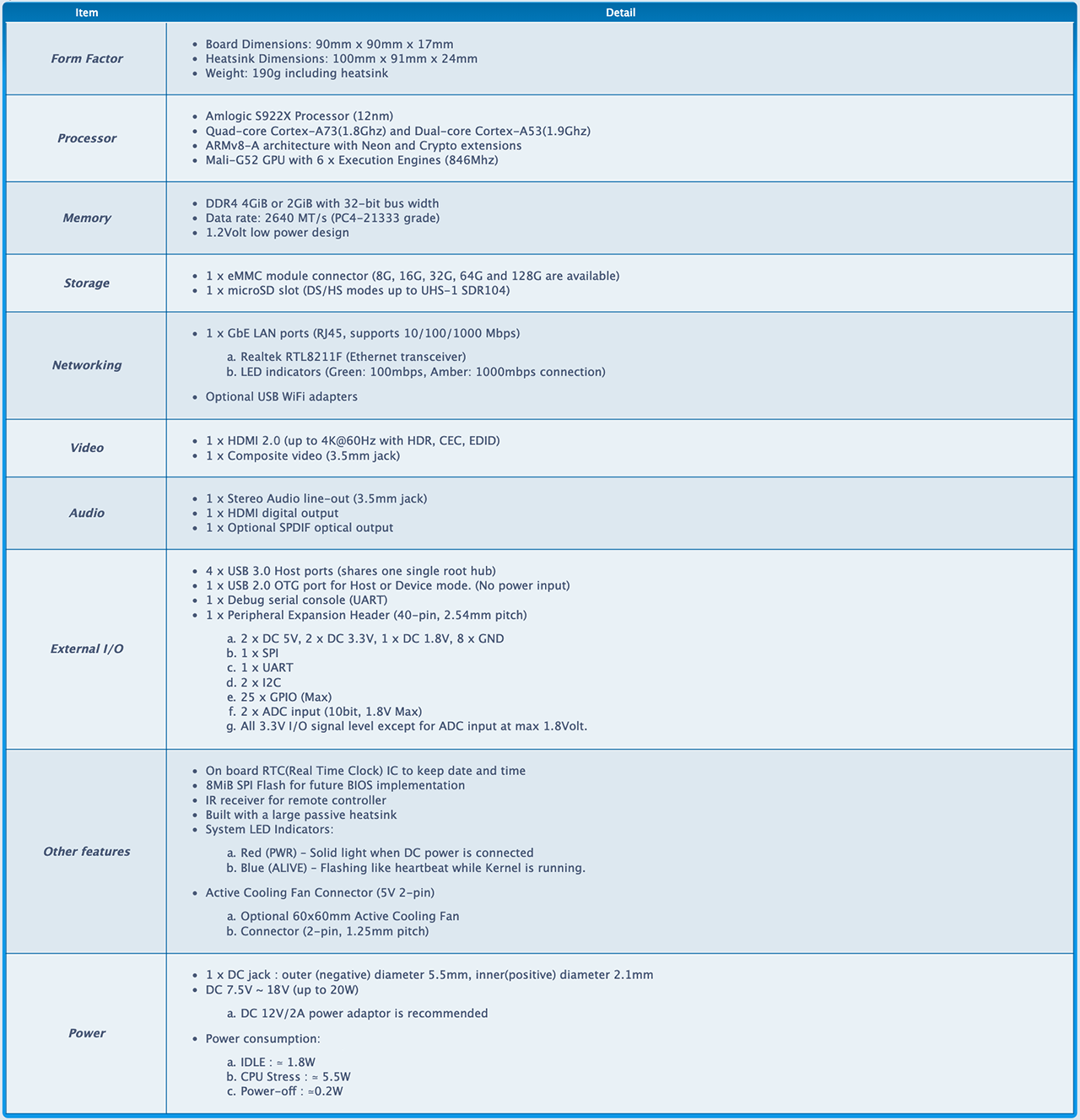